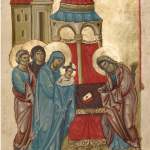 Presentation of our Lord in the temple: Feb 2nd 2020

If you haven’t already, it’s time to take down your Christmas decorations.

Today is the Presentation of our Lord in the temple,

the official end of the Nativity season.

From here on out, in the church year, Jesus is no longer a baby.

Luke points us onward, to Jesus’ adult life and ministry, with the words:

“The child grew and became strong, filled with wisdom; and the favor of God was upon him.”

But today, 40 days after his birth,

we enter into the intimate story of Jesus parents,

their first-born son, to the temple, to redeem him.

We see Mary giving her baby trustingly into the arms of the old man Simeon.

We hear Simeon, near the end of his life, say the words of his own dismissal,

as he gazes upon this child just beginning life.

God had promised old Simeon he would see this day, the Messiah in the flesh, and now Simeon can die in peace.

In this scene we also feel;

we feel both the comforting words Simeon has for us,

But also the piercing words the old man speaks:

“This child is destined for the falling and the rising of many in Israel, and to be a sign that will be opposed so that the inner thoughts of many will be revealed– and a sword will pierce your own soul too.”

Jesus is to be both Light and Truth.

The Presentation of our Lord in the temple

and happens to fall on February 2nd  — the midpoint of winter—

The Sun is halfway on its advance from the winter solstice to the spring equinox.

An old tradition of the church calls this day Candlemas–

Celebrating the day of presentation with the turn toward spring.

Christ is the light of the nations, therefore, the church blessed candles (necessary to ride out the remainder of winter) on this day,

and all this gave way to procession of candles.

The darkness of Winter turning toward light, hope for the spring,

as you can see in this old traditional Candlemas saying :

If this sounds familiar, you’ve probably guessed by now,

Our own Groundhog Day has its roots

in the ancient Christian tradition of Candlemas.

Sure, Mary and Joseph’s trek to the temple in Jerusalem

but that’s where we are folks.

The great festival of Groundhog Day.

I’ll have to admit I’m not a great follower of this day,

having to perform for thousands out there in the cold of winter.

But I am an enthusiastic fan of Groundhog Day the movie.

I hope you’ve seen this film, with Bill Murray and Andie MacDowell.

It is very entertaining and funny.

It is a love story.

And Groundhog Day is packed with existentialism, theology, and hope.

The film tells the story of Phil Connors,

Phil has to go to Punxsutawney

to shoot the coming out of the stupid groundhog who shares his name.

Phil is miserable and he shares his misery with all those around him.

Phil cannot wait to get the whole thing over and leave town,

but as luck would have it, through a clever series of events,

Phil ends up having to stay in this town, through eternity, or almost.

Phil has to live with same people and the same events every single day.

He wakes up to the same song on the clock radio,

He has to live with his same old self day after day.

He becomes so fed-up with his life that one morning, before the camera,

and it’s going to last you for the rest of your lives!”

Thinking nothing will ever matter again, Phil goes wild,

he paints the town,

exhausting all the pleasurable opportunities this place has to offer.

Then, after day upon day of monotonous living,

Phil begins to experience the people around him as living beings,

Through all of this, what we the viewers get to see is this man’s transformation from a pessimistic jerk to a compassionate helpmate.

The transforming, poetic Phil says on his hundredth GHD to his television viewers, “Winter, slumbering in the open air, wears on its smiling face a dream… of spring.”

What creates this change in Phil?

He finds that every other iteration,

every path that he’s tried from self-indulgence to suicide,

leaves him back with the same old unlovable and pathetic self—

Phil begins to believe life is pointless and he is worthless.

And still he cannot escape.

It is only when Phil learns to love that he begins to change.

The movie’s heroine is Rita, who detests Phil at first, who wouldn’t?

But as she watches Phil caring for others and sincerely going the extra mile, she can eventually return Phil’s love,

not because Phil’s transformation makes him perfect.

It makes him human.

We could each of us, pretty easily, after watching this movie,

write a moral of the story, Groundhog Day.

We should do this in popcorn theology one night…

One moral I’d propose is: No person is an island; we are tied together by God. The idea behind this comes from a devotion written long ago by John Donne, an Anglican clergyman from the 1500’s.

No man is an island entire of itself; every man

is a piece of the continent, a part of the main;

…any man’s death diminishes me,

because I am involved in mankind.

And therefore never send to know for whom

the bell tolls; it tolls for thee.

As Phil finds out persons humans are not made to be islands,

each fending for him or herself.

We are here on earth, together, as members of the human race.

We are made by God into families

into communities that have the power to shape us.

And when that goes awry,

as it sometimes will because we are human and not perfect,

compassionate people pick up the slack,

caring enough to put aside their own stuff to reach out.

This past week here in Scottsboro, we’ve learned this lesson once again

as the tragedy of last Sunday night unfolded,

and we learned that

On Wednesday I attended a prayer service at Jackson County Park—

with other community members & pastors, along with

some survivors of the deadly fire and their family members.

Together we lamented the loss of precious lives,

We lifted up our sorrows to God and we held one another.

The sharing of stories, as hard as they were to hear,

gave human voices and faces to the victims,

and relieved, if only a little,

the burdens carried by those who could not save them.

The sharing of resources offered another kind of relief,

This experience brought John Donne’s poem to my mind.

“Any man’s death diminishes me, because I am involved in humanity.”

The converse is also true: Any person’s life-giving love –

their gift, support, prayers – strengthens us all,

because we are all members of the same family, the family of God.

There’s an exceptional theologian of our day too named Frederick Buechner.

I have no idea if Buechner has seen Bill Murray in GHD,

but I have to believe he has and loves its message of hope.

“The life I touch for good or ill will touch another life,

and in turn another, until who knows where the trembling stops

or in what far place my touch will be felt.”

The point is to touch, to love generously and see how

not only we are transformed by God in the process

but so too is our world.