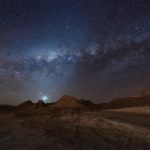 The roads we choose become part of who we are. Filled with new insight and renewed courage after their experience of the divine, the wise men chose go home by another way.

I have yet to meet a family who doesn’t have a traveling story.

These are stories of getting lost and stumbling upon something unexpected

and of course, the proverbial family story with the line,

“Naturally, he would not stop to ask directions.”

My family has many such stories, as my parents loved to travel—

they took us across Europe in a VW camper,

out West over the Rockies to Yellowstone,

and up north to the Great Lakes, into Canada in the same camper,

our trusty paper Atlas on the dash to show us the right turns to make.

I can’t say we ever followed a star,

but in all our travels we learned a formative lesson:

The roads we choose become part of who we are.

I know this intimately as a bicycle rider—

only to have to painfully retrace our steps,

returning up again to get back on the route we intended.

This is how we know the Magi who visited Jesus were wise men.

They stopped to ask directions.

wrote an article about this passage in Matthew’s gospel.

He titled it, “Off by Nine Miles.”

Brueggemann explains why the wise men went to Jerusalem,

and not Bethlehem, which is nine miles south of Jerusalem.

Jerusalem’s fame was known the world over.

It is the place of kings, after all.

God’s plan for Jerusalem is written about all through the OT,

from the Prophet Isaiah we read about this shining city on a hill… Jerusalem,

“Arise, shine; for your light has come,”

predicting great wealth for this holy city, “They shall bring gold and frankincense, and

shall proclaim the praise of the Lord.”

It makes sense then that the Magi went there first,

looking for the king of the Jews.

It makes sense also, that King Herod was frightened by this, as Matthew tells us.

Herod must have been enraged…What King? I am the King here!

It makes perfect sense that the people were scared too,

because they knew of Herod’s anger and his terror.

The Jewish priests, who were summoned by Herod in this crisis

were able to help; the priests knew the scripture

They quoted to the wise men from the prophet Micah:

“But you, O Bethlehem of Ephrathah . . . from you shall come forth for me

one who is to rule in Israel, whose origin is from of old.”

–and they sent the wise men off toward Bethlehem.

Bethlehem, a humble town, not an urban city like Jerusalem.

Bethlehem would never be the center of economic wealth.

But little, rural Bethlehem, with its dusty roads and rustic homes

would offer the wise men just what they were looking for.

There is an underlying story in the narrative Matthew tells, too.

Matthew writes about the unjust/unfair political system under Herod,

to expose and critique it.

Jerusalem had an economic system that worked only for the rich.

As the prophets had done before him,

the entire theme of the OT is the message that God wants everyone cared for,

especially the poor and the orphaned and widowed.

Matthew knew that in Jerusalem

the poor had to sleep outside the walls of the city.

The powerful and those with prestige influenced every aspect of life.

Matthew was also intent on exposing the awful reign of King Herod:

He mentions Herod ten times in this one short chapter.

Matthew tells us of Herod’s preoccupation with himself,

Herod’s control of the people by instilling fear in them,

And Herod’s murderous ways which bleed into every aspect of life in Judea.

Then skillfully, and beautifully, Matthew turns the narrative to explain:

There is another way.

A way not of power and might nor of fear or riches,

but a way of openness and giving and love.

On the wise men’s way out of Jerusalem, Matthew writes

“there, ahead of them, went the star that they had seen at its rising,

until it stopped over the place where the child was.”

The wise men saw the star rest on that place

and “they were overwhelmed with joy.”

This king, had come not in glory, not in a shining city on a hill

This king had come simply, in a small town, as one of us.

God chose an unpretentious birthplace, Bethlehem, to reveal God’s self to us—

God entered the world of shepherds and hard daily life.

God chose to reveal his purpose not to the ruling elite or powers that be, but to peasants.

They learned that God comes to us completely vulnerable, wanting our love.

that God became one of us, choosing an ordinary life, rather than a kingly one.

They learned that God works not by fear, but by the power of drawing us in

The wise men’s experience of the Christ child

gave them insight they’d not had before –

they began their journey thinking that

God would certainly be revealed in greatness

and ended their trek understanding that

a path so common that everyone might know God’s love is for all people.

And a decisive mind to go their own way.

The love they found in Christ conquered all their fear, and

in the end, of course, they went on their way home,

not afraid of Herod, but in defiance of him.

They went home by another way.

This is our aha moment—our Epiphany.

Like the wise men, our response to the revealed presence of God, changes us.

When we let the divine into our lives, to be part of who we are,

Not only can we be free of fear,

we can journey a different path

than what makes sense to the powers of this world.

In his life, Jesus many times, said do not be afraid

Without fear, we are open to discovering new avenues in life, new ideas

Without fear, we can better use our imaginations to explore solutions,

rather than just accepting the ways of the world that seem to overpower us.

our intuition (without having to question ourselves, we can behave as Christ would have us, naturally, like a horse knows how to find it own barn, we know who our home is);

our emotions too, can become less reactive and more enlightened (when I was a middle school principal, sometimes students would have to come see me because they’d get in trouble, maybe hit someone; I would ask them what happened and they’d point to someone who made them do it. I’d say, you might meet many people in this world who will be mean or hateful, but are you going to let them define who you want to be?)

Even our intellect grows as God enters our lives

enabling us to stand up, and speak out, and find hope in the humblest of places,

joy in the unexpected journeys.

What journeys will we trust God is calling us to undertake,

I suppose is the question.

This season Epiphany is a good time to explore that question.

The wise men could have chosen security, keep things the way they are,

report to the unforgiving King, and be on their way,

instead they chose to go home by another way.

One of my favorite song artists of the ‘80s is James Taylor.

He wrote a song on this passage in Matthew –

entitled Home by Another Way.

that is, get a clear head about who you are following…

it is not worldly king or a politician or a boss

or any powers that be on this earth, who promise security and prosperity.

Christ, the teacher, who tells us to Fear Not.

Christ, the Savior who comes to be with us… no matter where we are

Christ, our God who considers time with us, time well spent

celebrates when we journey with him—

to the humble places, on the unexpected roads—

and allow ourselves to be changed in the process.

The roads we choose become part of who we are.

Maybe me and you can be wise guys too and go home by another way.