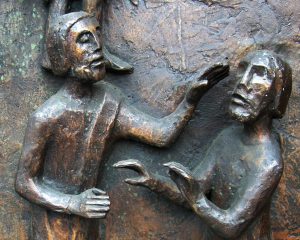 I’m glad to be with you again, via Facebook Live.

We’ve all been saying how surreal this time of separation is for us—it’s unbelievable, dreamlike.

I read about the Great Plague in the 1600’s and books on the Spanish influenza of the 1900’s but I have to admit I never dreamed we’d be facing a global pandemic in this century.

More than that, I’d have even put money against a bet that I’d be a televangelist now.

Still, I’m very grateful to be here with you, in this place—

in this parish who’s seen a lot in its 140 years, and survived some crazy times.

If you’ve been following along this Lent, you know we’ve been hearing a LOT from the gospel of John.

I mean “a lot” in a couple of ways ….. we’ll have four consecutive stories from John after next week…..AND a lot because, by now, you know John is a loquacious evangelist.

His stories are long, and involved, and I bet you wonder when I’m reading the gospel story, when will it end, and then you must worry, just how can we get a good short sermon out of all of that?

I’ve been wondering too.

There are so many avenues to explore.

How can anyone be born after having grown old?

Jesus’ explains being born of water and spirit, and Nic asks,

“How can these things be?”

Last week, the woman at the well eagerly asks Jesus,

“Where do you get that living water?”

And later to her townspeople,

artfully coaxing them to believe

that what she has seen and heard is true,

she says, “He cannot be the Messiah, can he?”

because the questions reveal,

they bring to light our misunderstandings,

the questions show how we so often get things backwards.

Nicodemus, the learned man is revealed as clueless.

is discovered to be an apostle.

Today’s story of the Blind Man pummels us with questions—

or pummels the man healed from his blindness, I should say.

He’s healed “for crying out loud!”

Who’s gonna celebrate with him?    No one.

Right away, the poor man is quizzed and questioned

by the townsfolk: Aren’t you the one who was blind?

How was it done? Where is the man who healed you?

The man was grilled by the religious authorities

who objected to someone healing on the Sabbath.

How did you receive your sight?

Who is the man who healed you?

What did he do to you? What do you say about him?

Poor guy, he didn’t even ask to be healed.

From the beginning of the story, I feel sorry for the guy…

Jesus is walking along there in Jerusalem,

the story tells us,  and he sees this blind man.

Immediately, the disciples begin the questioning.

Who was to blame for this man’s blindness?

Who Jesus, this man or his parents?

he hears your accusing questions.

I suppose he’s heard them all his life.

I wonder how many folks had just walked on by—for years?

Jesus sees him and stops.

“Neither,” Jesus answers the disciples.

“Neither this man nor his parents sinned, but this happened so that the works of God might be displayed in him.”

You go Jesus! I want to shout.

You not only heal this man’s blindness,

but you restore his dignity.

to explain this man’s blindness in terms of sin.

Jesus never says why the man was born blind,

but he says that God’s works are revealed in him—

how this transformation comes about.

At first when the no-longer-blind man

is plagued with questions,

he seems to have few answers,

he just keeps telling the people, Yes, I am the man born blind.

Not long after, the Pharisees cross-examine the man

We see the man now seems to have had some enlightenment,

“the man Jesus healed me, he must be a prophet,” he says.

Later when the religious authorities come at him again,

the man gets surly. This is my favorite part.

He makes sport of the religious authorities

“Why are you asking so many questions, do you also want to be his disciples?”

The once blind man taunts the authorities…

they had shouted at him, “You couldn’t see anything.”

“Here is an astonishing thing!” he tells them,

“You do not know where Jesus comes from,

and yet he opened my eyes.

If this man were not from God, he could do nothing.”

Oh to have a good comeback,

a great argument when it really counts.

There is one question in this story

that leaves its barb in the leaders,   and I think in us too.

It comes at the end.

“I came into this world for judgment

so that those who do not see may see,

and those who do see may become blind.”

These leaders reply with a question, mocking Jesus,

“Surely we are not blind are we?”

But they are, the people in the story cannot

believe or understand even what they’d witnessed themselves.

The blind man receives his sight, but everyone else seems to have lost theirs—

the people are fighting over the definitions of sin

and the giving of grace, and they miss the healing presence of God in Jesus’ actions.

Surely, we are not blind, are we?

This question we would do well to digest.

When I taught middle school, a few years ago,

we learned to use some great techniques to help students

solidify or retain their learning.

My favorite was an exercise on reflection.

After a unit on say, Citizenship,

the student would have to write down.

“I used to think that, now I think this.”

I used to think citizenship meant

having a particular status and enjoying rights,

but now I think it means more.

Now I think citizenship means being a part of something

and having responsibility to a larger body of people than just myself or my family.

Of the most inspiring people of faith

I’ve read about or met in my life,

are those who’ve had moments of unexpected enlightenment.

Like this blind man who didn’t expect to be changed,

didn’t ask for it, but it happened anyway.

He’s the head of the National Institute of Health.

This institute, NIH, is our nation’s

In the midst of an alarming health crisis,

you and I can only imagine the pressure

I read an amazing interview with Dr. Collins

in the Atlantic Magazine this week.

The article delves into the coronavirus statistics

and the NIH’s work against the clock to find a vaccine.

I read that our situation is hopeful in the long run,

Still, I’m encouraged because Collins and other scientists at the top of this field are working furiously.

I’m encouraged too, because Collins is also a man of faith.

And faith gives hope, it instills purpose in us and endurance.

But Collin’s faith wasn’t always present in him.

He grew up in an Episcopal church.

His parents made him sing in the choir.

Later in college and medical school Collins found himself questioning religion and eventually he lost all his belief.

He was an atheist.

He said he thought at that time, people who had faith in God,

He discounted their belief.

However, it was not long before his transformation began.

Sitting at the bedside of patients,

with those who had a terrible illness,

those he knew medicine could not help.

Collins was puzzled and unsettled to find in them

a peace and equanimity, and even

a sort of sense of joyfulness

that there was something beyond.

But he had to find out, so he started asking questions.

During this quest, he realized

That science is unable to address meaningfully,

‘Why is there something instead of nothing?

What is the meaning of love? Is there a God?

What happens after you die?’

Those are not questions to which scientific methods can be applied.

Collins says it this way,

“It constricts the universe of important questions to assume they are all questions that science can address.”

The new ideas he found were like light shining into a new part of his life.

It changed how he viewed other people, and himself.

And in allowing time for grace to grow inside of him.

I like to imagine Collins doing the middle school exercise I talked about. I wonder if he might say,

I used to think faith was nonsense, now I know, faith is everything.

I wonder how you and I might express the transformations, the enlightenments in our lives:

I used to think the goal of faith was finding certainty, now I know the goal is simply to be faithful.

I once understood discipleship as basically obedience,

now I understand that being a disciple means seeing beyond my own needs, instigating justice, and fighting for peace.

The story of the blind man offers a timely truth for us today.

We are like this man who struggles to answer

all the questions swirling around him once his eyes are opened,

but he perseveres and he grows in faith and boldness

in the new light he experiences.

Right now, this crazy world of ours might seem surreal,

but it is real.

We are finding too, that this odd reality

may be here for a while.

Our calling at this time is to open our eyes

to the work God is doing in us and around us,

and to be part of God’s work ourselves.

“I don’t know the answer to all your questions,”

“But one thing I do know, that though I was blind, now I see.”