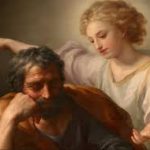 (The above recording begins about 20 seconds into the sermon–technical difficulty!) Matthew 1:18-25

Here is the text of the sermon below:

We are deep into Advent, friends.

For weeks now we’ve been wrapped in purple,

Reminding ourselves of this special time of anticipation and expectation

of God coming into our lives.

Hopefully, our Anticipation has kept us awake

And alive with hope, for Emmanuel, God with us.

And hopefully, our Expectation has helped us prepare,

for God’s word to be born in us.

I already know I’m going to miss Advent because

it is in this milieu of anticipation and expectation

I can best pay close attention to the evidence of God

active in our lives, and calling us to action.

…to you who are called to belong to Jesus Christ…

this is the way Paul launches his Letter to the Romans

Our NT reading today is likely not the lesson

you thought we’d talk about.

It is, after all, only Paul’s long-winded introduction

of himself to the Romans.

It takes seven verses for Paul to say hello,

his longest preface of all his letters,

and yet he crams this into one, long, run-on sentence.

right before us, but before we go there,

”to you who are called to belong to Jesus Christ….”

Our calling, our belonging,

has everything to do with God’s incarnation…God with us.

I joined the EYC this week for a very fun, and fast paced, scavenger hunt around the city of Scottsboro.

giving each us a sheet of activities to do in one and a half hours;

We had to record these on our phone cameras.

The tasks        consisted of such things as

singing a Christmas carol to someone over the age of 60,

reading Luke’s Christmas story to a someone in Walmart, and so on.

Not that I’m competitive or anything,

but I am happy to say that my group beat Brett’s and Faith’s and Johnny’s.

It is important to note in this game that groups received

One item on the list   was to ask five people

to tell us what their perfect Christmas looked like.

My group went to the liquor store—well it was on our way back to church.

Other than one delightful woman

in the parking lot and pet her dogs—and who said funnily,

“my perfect Christmas is being in the Caribbean,”

the recurring response, became a refrain, over and over people replied:

“Christmas is being with my family.”

We needed no translator when the man pumping gas, answered, “mi familia.”

At holiday time, when all the hustle and bustle subsides,

and the time seems to slow down,

we yearn to be with those we love, with people who love us back—

even with all our warts and quirkiness.

But heaven forbid we let the rest of creation see those warts.

When I think of all the Robb Family Christmas cards

we tried to take photos for, I have to laugh.

because he barely made it back into the frame

before the timer snapped the picture,

then the kids were cracking up because it took too long.

It is such an American thing, right?…

of our beautiful families and stories of our wonderful travels

or our kids’ accomplishments.

I’m not criticizing this, as I’ve sent many myself.

I am just chuckling a bit, because these portraits

are so far from the messy stable of the first Christmas,

and they sound nothing like the family of Jesus.

We see this clearly in Matthew’s gospel.

Today we enter the gospel story just after Matthew has recited

all the generations of Jesus’ family from the very beginning.

from having to read this long genealogy.

Matthew’s list of Jesus ancestors begins with Abraham and it goes on and on….

to Obed, Ruth and Boaz’s son,

to persons with more unpronounceable names, Zerubbabel and Salathiel.

Rahab the wily heroine who kept a house of ill repute,

Manasseh whose reign, beginning at age twelve and lasting 55 years,

is described as detestable and evil; he even sacrificed his own children.

There’s Tamar, too, honored as the first woman listed in Jesus’ genealogy.

Tamar is the mistreated wife of Judah, who,

left abandoned, seeks justice on her own by means of after-hours trickery.

And, of course, there’s King David

who fathered a son…with another man’s wife.

The beginning of Matthew may not seem like riveting reading,

but that’s only because we aren’t familiar with all the family stories.

Matthew paints for us the real and messy portrait of Jesus’ family.

Matthew begins the story of Jesus in this way

because he wants to make sure everyone knows this:

Jesus’ lineage is from Abraham and David—as prophesied long ago.

Matthew is so intent on making this point

that the birth story of Jesus he gives us is very different than Luke’s;

Matthew’s story is about Joseph, descendent of David.

While we seem to favor Luke’s beautiful story,

It is good to hear about Joseph.

Joseph is a righteous man, after all—

he was living a good life, a just life,

faithfully following the spirit of the law,

not worried about the letter of the law.

We learn this about Joseph right off the bat;

Joseph, finding his betrothed, young Mary pregnant, had mercy on her.

Rather than follow Deuteronomistic law, and call her out, which meant she’d not only be humiliated but could be stoned to death;

Joseph decides to quietly dismiss her.

Joseph, is a righteous man, Matthew tells us

living a life awake to God, even in his sleep.

Joseph hears God’s plan from the angel and changes course.

He decides to take Mary as his wife,

trusting God’s word that this is his calling.

I’m sure this is not the way Joseph imagined his life would go.

Like you and me, I’m sure Joseph had dreamed of the perfect family:

Instead, he is faced with God’s dream—

a non-conventional and scary proposition—

and God knows it is scary, God tells Joseph,  do not be afraid.

Joseph could have walked away from this,

And rejected the proposal; instead, he decides to own it.

Joseph did as God commanded;

he accepted the whole messy business;

he trusted that God was present in it;

and in the end, he named the child,

What was it that made Joseph so faithful, so brave?

And what about Mary for that matter, who we talked about last week –

Joseph and Mary’s fidelity to God, in such uncertain circumstances,

gives us more than just a picture of their characteristics;

they are servants of God.

This is exactly what Paul’s 135-word introductory sentence

to the Romans is going on about – (READ IT)

and who is that? Paul, servant, apostle, called to belong.

Paul cannot explain who he is without talking about Christ.

It is Paul’s identity that leads to his fidelity.

Just like Joseph and Mary, Paul knows he belongs to God,

and it enables him to hear and respond to God.

Even from prison—as Paul has been;

Even as immigrants—as Joseph, Mary and Jesus will be

Even when our lives aren’t turning out

Even when what is happening in your life may not be what you’d planned,

We are graced with knowing

God can be born here too.

Because it is obvious in Jesus own lineage,

God is looking for willing partners,

I was reminded of another Joseph this week, who is such a man, a willing partner. Joe Burrows made the headlines for winning the Heisman trophy, and in accepting, he told the country of his small town, where people are hungry—hungry for sustenance and hungry for hope. I have no idea if Joe planned the speech or his mother instilled the idea in him, but I suspect it came from simply being attuned to love. There was no shame in telling it like it is, there was only love for God’s people, and love poured in.

No matter where you’re born,

Or how wily you are,

Or how crazy your family is,

or who you choose to love in this world,

or what sticky messes you’re dealing with.

God wants to be at work in the midst of your life, with you.

Advent is almost over, but of course,

it is just the beginning of life anew.

The stories and lessons of Advent

teach us to create that milieu around ourselves, like Joseph.

and a heightened awareness…that we may be awake to God,

in those awkward and scary propositions before us,

that God is with us,

telling us to look beyond our own dreams,

and see and hear God’s dreams for the world.