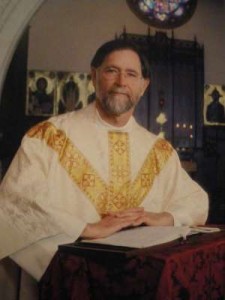 Dex, a native Floridian, had a career in his own environmental business before entering Virginia Theological Seminary.  He was ordained in Tampa in 1995 and served 2 congregations there for 6 years.  Dex served as Associate Rector for six years at Christ Church in Bradenton in the Diocese of Southwest Florida.  He and his wife Heidi moved to Sewanee in 2006 to develop a retreat ministry.  He served as Interim Rector for two years at the Church of Good Shepherd on Lookout Mountain, Tn. He comes to us after serving six months as Interim Rector of St. Thomas in Huntsville, Al.  Dex has special interests in outreach, missions and youth. He is a real people person and excels in pastoral care.

Dex and his wife Heidi, a Methodist Minister, live in Sewanee, Tn.  The couple have six daughters and 11 grandchildren. Heidi serves as Pastor of Lookout Mountain Methodist Church, Lookout Mountain, GA.  Dex is a self described “farm boy” who enjoys gardening and is trying to convince Heidi of the need for a tractor. He enjoys fly fishing and hunting.