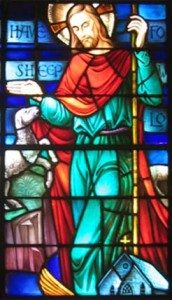 St. Luke’s Episcopal Church traces its Jackson County roots back to meetings in private homes during the 1840’s and 1850’s. Priests from Huntsville’s Church of the Nativity traveled to Scottsboro by horseback to conduct services twice a month on Sunday afternoons in homes, store fronts, and in a “union church building” used by several denominations, located at the southwest corner of Laurel and Caldwell Streets in Scottsboro. Services were discontinued during the Civil War years, but resumed after its conclusion.

When enough funds were raised, the first church building was built in 1878, on north Broad Street near the railroad track. The church, a Gothic-style frame structure, had heart pine roof trusses which were hand carved from logs hewn on Col. John Snodgrass’ farm near Hollywood, Alabama. Among the early Episcopal families in Scottsboro were the Snodgrass, Brown, Boyd, Kyle, Telford, and Payne families, who figured prominently in the early history of Scottsboro and in the origin of St. Luke’s Episcopal Church. The first service in the original St. Luke’s church was held on September 2, 1878, conducted by Dr. John Bannister, Rector of the Church of the Nativity, Huntsville. St. Luke’s was formally admitted into the Diocese of Alabama in that year –over 140 years ago!